From Soil Ecology Wiki
Jump to navigation Jump to search

Loam is a type of soil comprised of varying proportions of sand, silt, and clay. Loam was given the Latin name pinguis humus by the Roman poet Virgil. [2] 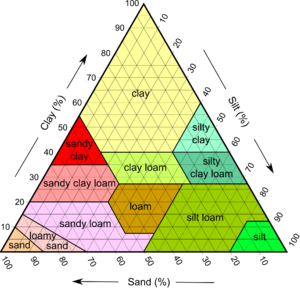 Life within the soil

Some of the inhabitants of loamy soil include the water-dependent protozoa and Nematodes. They usually prefer soil with a greater proportion of silt than sand due to the former's superior water retention. [2] Acari, also known as mites, can tolerate more desiccation than other microorganisms, so they do not need as much exposure to water and can live in a larger range of soil types.

Loam is the best-suited soil type for growing most plants due to its propensity for holding enough water and nutrients to satisfy their needs. [3] Clay dominant soils, although rich in nutrients, have poor drainage due to the small pore size and is not ideal for roots to grow in due to its hard packed texture, which roots often have difficulty penetrating. Sandy soils do not hold water well, and silt does not hold nutrients well. By offering a mixture of these particles, they accentuate the benefits and balance out the detriments of each particle size, forming fertile loam, the ideal soil type for many plant types. The ideal loamy soil patch is, by mass, 40-60% pore space containing air and water. [5]

Due to its mixture of sand, silt, and clay, a loam soil will have unique characteristics to look for. For the Soil Texture Triangle figure above, if one can determine the soil's percent by weight of any of the two soil characteristics, the subtracting the two known values from 100% will yield the percentage of the unknown value. When using the figure, one typically starts by following the sand value, first, but because as long as at least two values are known, this is not mandatory. [6]

In the absence of proper laboratory sampling and measuring equipment, a few different rudimentary tests can be performed manually to determine, roughly, the type of soil that makes up the patch of ground in question.

Involves rubbing a moist sample of the soil between fingers

Involves squeezing a ball of moistened soil in the hand

Involves squeezing a moistened sample of soil in a ball between the thumb and forefinger.